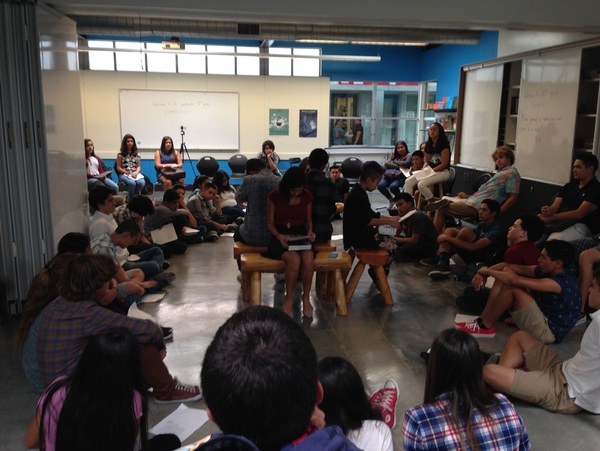 For "The House Of Mango Street" performance we got put in groups, and each group was given a chapter to read out loud. To make the performance more alive, we added sounds to depending on the mood of the reading, and emphasized on the words that meant a lot in the chapter. I really liked this idea because it was a way for us to feel more comfortable performing in front of each other.

For the dialogical Interview we had to interview the partner that we got, to write a poem about them. We had to ask three questions, and in each question get deeper information if possible. We also had to get a story or something important for the story, and we needed to have the five senses included in those things. We had to have notes on sight, smell, speaking, and hearing to make the poem more vivid, and so the reader will be able to imagine whatever it is about better.

During this project we had a tiny field trip to HTMCV to ask for critique and give critique to a 8th grade class. We chose a partner and sat down in a comfortable place to start the critique process. I helped my partner with her essay about what made her as a person and she helped me with my "I Sing to You" Poem. We started by giving each other our work then filling out the page that we both had for each other for the critique. Her essay was perfect, it just needed a few fixes here and there. She gave me some good advice on the poem, because of her I started to write more about her little sister.

I Sing to You of Alexis

The Tribes Of Mexico & America